Tony (Tim Roth) is a successful American filmmaker who has made a pilgrimage to Faro Island in Sweden where Ingmar Bergman lived, worked, and made some of his best films. His wife Chris (Vicky Krieps) has come as well. She is hoping that staying at the master filmmaker’s place will help her jumpstart her screenplay; she has not been able to figure out how to end it. She stands on the sidelines as Tony, a celebrity, is showered with praise by those attending a filmmaking workshop.

Bergman’s creative presence haunts the Americans as they learn that he had six wives and nine children. They each take separate work rooms to focus on their projects, but he is more productive than she is. When he goes on a “Bergman Safari” to locations from his movies, she bumps into a young Swedish film student (Hampus Nordenson) who provides her with a rounded picture of both the light and dark sides of the creative genius whose 30 films touch on spiritual and psychologically serious themes.

After showing us this couple’s separate explorations of Faro Island, Swedish writer and director Mia Hansen-Love shifts gears. Chris asks Tony listen to and critique the screenplay she has written. This film within-a-film stars Amy (Mia Wasikowska) and Joseph (Anders Danielsen Lie) who had a love affair years ago and find themselves attracted to each other again while attending the wedding of a friend on Faro. 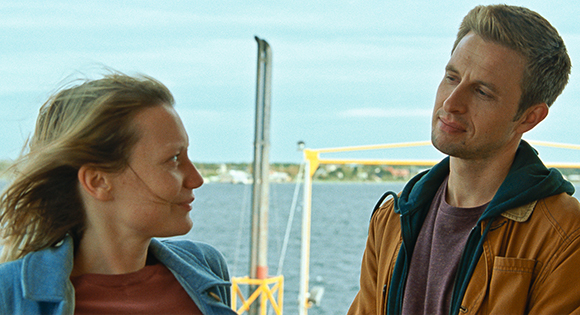 Staying on Bergman’s island puts the American filmmakers in a reflective mood, which is conveyed beautifully by Hansen-Love’s screenplay. She sees the imagination as the creative force within artists who seek to reframe their experiences and explore the manifold mysteries of love. Her characters here examine their vocation as well as their relationship.

Why do they want to make films and are they up to the challenge? Why, Chris asks, is the creative process so difficult? She confesses to her supportive husband that writing for her is pure agony. Yet something draws them to this work and Bergman’s in particular. After seeing Bergman’s Cries and Whispers in his screening room, the two assess its impact upon them:

“Chris: It’s like a horror movie without catharsis. Usually when you come out of a horror movie you feel reassured because you know that what you just saw can’t happen to you. Not with Cries and Whispers: the solitude, the agony, the horror, the dying — it’s the way things are.

“Chris: I just hope [Bergman] had more fun in his life than in his movies. Why are his characters so awful? Why doesn’t he ever show any tenderness of lightness?

“Tony: He wasn’t interested in being light. He was dark and he wanted to explore that. It was fun for him.

“Chris: Why didn’t he ever once want to explore happiness? Look at this place — his houses, the island, beautiful landscapes. Everything is less harsh than in his movies. . . .

Movies can be terribly sad, tough, violent, but in the end they do you good.

“Tony: Why do you watch them then?

And perhaps that’s the point of this beautifully shot and realized film. It will get you asking why you love movies too.